Before Hurricane Katrina, before Superstorm Sandy, there was Hurricane Andrew.

Before Hurricane Katrina, before Superstorm Sandy, there was Hurricane Andrew.

The intense Category 5 hurricane, a compact buzzsaw that ripped the roofs off thousands of South Florida homes 25 years ago, was so catastrophic that it led to sweeping changes in the insurance industry, weather forecasting and disaster response.

And Floridians — shocked by acres of flattened houses — rewrote the state’s building codes, making them the toughest in the nation.

Now, as memories of the horrendous destruction of Aug. 24, 1992, grow dim, the lessons learned from Andrew may be fading, too. The building codes once hailed as the gold standard other states should emulate are under assault.

At the core of that growing dispute is a simple calculation: the tougher the building code, the more it costs to build a home.

This year, alarm bells went up all over the state capital, Tallahassee, when the Republican-led legislature and GOP Gov. Rick Scott passed a new law that untethers Florida’s code from international standards and requires fewer votes for the Florida Building Commission to make changes to the building codes.

“I don’t think builders are inherently evil people, but you’ve got to look at what their business model is,” said Fugate, who led Florida’s emergency management agency before heading up FEMA. “The quicker they get to sell a home with the least amount of cost and the least time delays increases the money they make.”

Republican leaders and the state’s home builders say such concerns are overblown. Jeremy Stewart, a Crestview, Fla., developer and president of the Florida Home Builders Association, noted that the bill passed in Tallahassee did not change a single building code. Instead, he said, it simply modernized the process for updating the code.

There’s no reason, he said, to think developers will use the new process to weaken the state’s building codes, and bristled at the suggestion that builders simply seek to cut costs.

“That’s absolutely false and misleading,” Stewart said. “There’s not a single contractor that I know of in the state of Florida that does not want to be operating under the most stringent code, that’s not concerned with the well-being of our customers.” 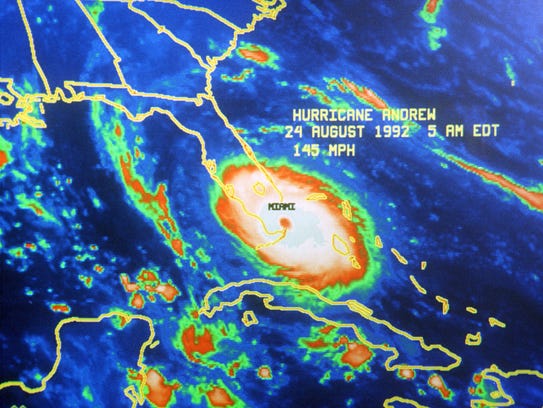 This photograph from a radar image shows Hurricane Andrew barreling into the coast of South Florida on Aug. 24, 1992. The red and yellow hues indicate it was packing deadly winds, soaking rain and destructive tornadoes. The photo is etched in the memories of many since Andrew unleashed its fury 10 years ago. (Photo: Associated Press)