PRINCETON, N.J. — After a historic Supreme Court session that included rulings on same-sex marriage and the Affordable Care Act, Democrats’ approval of the high court has surged to 76% and Republicans’ approval has plummeted to a record-low 18%. Americans overall are divided, with 49% approving and 46% disapproving. 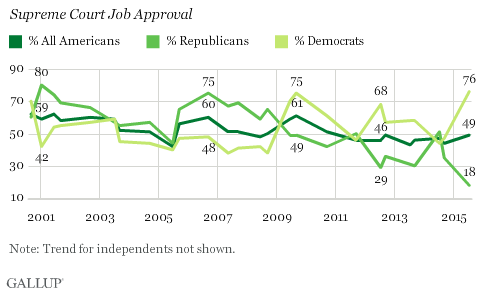 The new July 8-12 Gallup poll came after the Supreme Court issued rulings in late June that legalized same-sex marriage nationwide and upheld federal subsidies for health insurance purchased through government exchanges. Those decisions were hailed by President Barack Obama and other Democratic leaders but criticized by Republican leaders. The shift in opinions of the Supreme Court by political party indicates that many Americans are aware of the decisions, as well as the thrust of those decisions politically, and have adjusted their views accordingly.